Solar, wind, batteries, nuclear, tidal power, among others, provide carbon-free electricity. But their generation is usually immediately absorbed into the power grid for use or stored in lithium-ion batteries. Large-scale energy hoarding is expensive, and quite frankly, with base metal prices skyrocketing, maybe unattainable unless the Biden administration allocates billions of dollars to upgrade the grid.

Toronto-based Hydrostor has found a solution to storing power on the grid that doesn't involve batteries but instead stores energy in the form of compressed air in underground chambers. 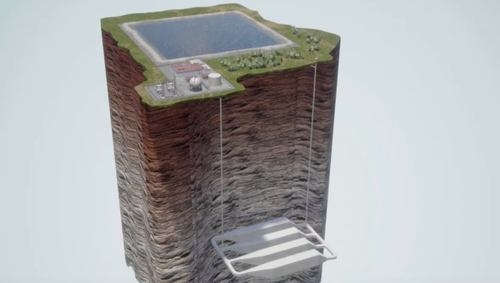 California is becoming the new site for two new compressed-air energy storage plants that "will soon rival the world's largest non-hydroelectric facilities and hold up to 10 gigawatt-hours of energy," said Popular Mechanics.

Compressed air is part of a growing type of energy storage to stabilize the grid. Here's how Hydrostor's: A-CAES technology works:

A-CAES uses surplus electricity from the grid or renewable sources to run an air compressor. The compressed air is then stored in a big underground tank until energy is needed, at which point it's released through a turbine to generate electricity that's fed back into the grid.

Rather than vent the heat generated as the air is compressed, Hydrostor's system captures that heat and stores it in a separate thermal storage tank, then uses it to reheat the air as it's fed in to the turbine stage, which increases the efficiency of the system. This could prove to be key; compressed air storage systems have typically offered round-trip efficiencies between 40-52 percent, and Quartz is reporting more like 60 percent for this system.

Hydrostor's A-CAES also makes use of a closed-loop reservoir to maintain the system at a constant pressure during operation. The storage cavern is partially filled with water and as the compressed air is piped in, the water is forced into a separate compensation reservoir. Later, when the air is needed, the water is pumped back into the air storage cavern, pushing the air out towards the turbine. - New Atlas

Hydrostor provides three-minute of how the technology works.

Hydrostor has two major projects in active development – one in southern Kern County and one in Central California, creating a more practical way to store energy on the grid than costly batteries.

When it comes to longevity, a compressed air energy storage plant has a lifespan of more than 50 years, far outpacing battery farms, like Elon Musk's Tesla Powerpacks.

... and to be clear - all this talk about net-zero carbon emissions talk in the next couple of decades is just a guess by policymakers.

Popular posts from this blog

March 17, 2019
World’s 1st remote brain surgery via 5G network performed in China Published time: 17 Mar, 2019 13:12 ·           A Chinese surgeon has performed the world’s first remote brain surgery using 5G technology, with the patient 3,000km away from the operating doctor. Dr. Ling Zhipei remotely implanted a neurostimulator into his patient’s brain on Saturday, Chinese state-run media  reports . The surgeon manipulated the instruments in the Beijing-based PLAGH hospital from a clinic subsidiary on the southern Hainan island, located 3,000km away. The surgery is said to have lasted three hours and ended successfully. The patient, suffering from Parkinson’s disease, is said to be feeling well after the pioneering operation. The doctor used a computer connected to the next-generation 5G network developed by Chinese tech giant Huawei. The new device enabled a near real-time connection, according to Dr. Ling.  “You barely feel that the patient is 3,000 kilometers away,”  he said.
Read more

From Amazon to Wal-Mart, digital retail is producing more jobs and higher pay

May 30, 2017
From Amazon to Wal-Mart, digital retail is producing more jobs and higher pay Written by Mitchell Schnurman, Business columnist May 30, 2017 Retail trade is one of the biggest job sectors in America, and the vast majority of those workers still clock in at brick-and-mortar stores. But the big growth is coming from e-commerce, which happens to pay a lot better, too. This is a promising development for retail workers who worry about thousands of store closings and the march of automation. E-commerce also offers a potential antidote to years of low productivity growth and income stagnation. “If this new pattern continues, it will raise real wages across the economy and rejuvenate the middle class,” said a report by economist Michael Mandel of the Progressive Policy Institute in Washington. By his definition, e-commerce includes online shopping, mail order and warehousing. That’s a more expansive category than usual and was created to capture the growth in what M
Read more

Too Much Power to the People? A Food Safety Site Tests the Limits

February 15, 2018
Too Much Power to the People? A Food Safety Site Tests the Limits Several national chain restaurants have been the target of complaints on IWasPoisoned.com since the site began in 2009. By KEVIN ROOSE FEB. 13, 2018 Dan Laptev, an electronics analyst, was making his way through the Charlotte, N.C., airport this month when he stopped at Starbucks for a light dinner — a ham-and-cheese sandwich and a cup of hot chocolate. He ate, drank, boarded his flight and got home. And that’s when the trouble started. Mr. Laptev spent much of that night hunched over the toilet with a violently upset stomach. Suspecting his Starbucks meal as the source of his ills, he sent a complaint through the company’s website, but got only an automated form email back. So he did the next best thing: He logged on to his computer and went to IWasPoisoned.com, a website that allows users to post reports of food poisoning, and submitted his saga. “I wanted to let people know to stop eating at Star
Read more