Showing posts from August, 2021
Show all

August 31, 2021
South Korea Bans App Store Payment Monopolies In Latest Blow To Google, Apple   BY TYLER DURDEN TUESDAY, AUG 31, 2021 - 12:00 PM South Korea just made history in the global battle to combat the monopolistic tendencies of American tech giants by becoming the first country to force Google and Apple to allow other payments processors into their app stores.  According to  Bloomberg , the new law  "sets a potentially radical precedent for their lucrative operations everywhere from India to the US." Lawmakers in South Korea's National Assembly passed amendments to the country's Telecommunications Business Act on Tuesday requiring app-store owners like Google and Apple to give developers a free choice of payment providers, opening the door for developers like Epic Games to collect payments directly from customers. The right to collect in-app payments is at the root of legal battles in the US and in other jurisdictions. The most notable example is perhaps the Ep
Post a Comment
Read more

August 30, 2021
Video Game Stocks Slide As Beijing Imposes 3-Hours-Per-Week Playtime-Quota   BY TYLER DURDEN MONDAY, AUG 30, 2021 - 10:15 AM   Four weeks after Chinese regulators  first denounced video games as "spiritual opium" and identified "video game addiction"  as a widespread phenomenon distracting young people from their responsibilities, authorities on Monday announced they would  restrict the hours during which Chinese minors are allowed to play. From here on out, gaming during the week will be banned . On Friday evenings, as well as during holidays and Saturdays and Sundays, gamers will only be allowed to play during a single hour between 2000 to 2100 local time. Already, Monday’s new rules are impacting shares of China's online gaming companies. Shares of a swath of companies, including Tencent, NetEase, Bilibili, Kingsoft Cloud, Huya and Sohu.com, tumbled during Asian trading. The new restrictions on video games are  merely the latest installment in China
Post a Comment
Read more

Second-Largest US Mortgage Lender To Accept Payment In Bitcoin

August 29, 2021
Second-Largest US Mortgage Lender To Accept Payment In Bitcoin   BY TYLER DURDEN SUNDAY, AUG 29, 2021 - 06:00 PM Several years ago, the prevailing bear case against bitcoin was that there simply was no use for the digital currency: one can buy up all of it, but besides selling to a "greater fool" there was simply no other use for the digital token. Since then thing have changed a lot: not only is institutional adoption now rampant with corporations and asset managers loading up, but increasingly merchants are bracing for the inevitable popular adoption of cryptos as a payment mechanism, with both Walmart and Amazon quietly building out an internal infrastructure to accept and transact in various cryptocurrencies. And soon, Americans will be able to pay down their mortgage debt in bitcoin first, and soon other cryptos. Last week, United Wholesale Mortgage - second-largest mortgage lender in the US - announced it was planning to accept Bitcoin for home loans in 3Q21 and
Post a Comment
Read more

Why Is The Gates Foundation Funding The UK's Medicines Regulator?

August 28, 2021
Why Is The Gates Foundation Funding The UK's Medicines Regulator? BY TYLER DURDEN SATURDAY, AUG 28, 2021 - 09:30 AM Authored by Nick Corbishley via NakedCapitalism.com,   Just as importantly, why is the regulator laying off 20% of its workforce in the midst of a global pandemic? On August 13, the UK government published a response to a freedom of information request in relation to the Medicine and He0althcare products Regulatory Agency (MHRA) — the UK’s equivalent of the FDA. It was in response to a question asking whether or not the agency had received funding from the Bill and Melinda Gates Foundation. The answer was yes: We do receive funding from the Bill and Melinda Gates Foundation as well as other sources outside government such as WHO. This funding mainly supports work to strengthen regulatory systems in other countries… The current level of grant funding received from the Gates Foundation amounts to approximately $3 million. This covers a number of projects and t
5 comments
Read more

August 22, 2021
90 Policy Groups Call On Apple To "Abandon" '1984'-Style Surveillance Tool   BY TYLER DURDEN FRIDAY, AUG 20, 2021 - 05:20 PM More than 90 civil society organizations wrote an open letter to Apple, demanding the company abandon its surveillance tool that plans to be integrated into iPhones, iPads, and other Apple products that will scan images before they are uploaded to iCloud for child pornography.  "Though these capabilities are intended to protect children and to reduce the spread of child sexual abuse material (CSAM), we are concerned that they will be used to censor protected speech, threaten the privacy and security of people around the world, and have disastrous consequences for many children," the open letter wrote, which was organized by the US-based nonprofit  Center for Democracy & Technology  (CDT). The  '1984'-style surveillance tool , called  "neuralMatch,"  is expected to be installed on US iPhones via a softwar
Post a Comment
Read more

August 22, 2021
The New Censors: Polls Shows Almost Half Of Americans Favor Government Censoring "Misinformation"   BY TYLER DURDEN SUNDAY, AUG 22, 2021 - 05:15 PM Authored by Jonathan Turley,   We  recently discussed  the  rise of a generation of censors as young people embrace the role of government and corporate censorship.   The erosion of free speech rights is manifest in a chilling poll from the  Pew Research Center  that shows a huge jump in favor of censorship among citizens with almost half now supporting the government barring “misinformation.”  The shift is almost entirely among Democrats who ( like Democratic leaders ) now overwhelming favor fewer free speech protections and more government control over speech. The poll shows 48 percent of survey respondents supporting government censorship of misinformation as compared to 39 percent in 2018. Republicans have become more protective of free speech but the shift among Democratic voters is startling. In 2018, just 40 percent
Post a Comment
Read more

August 18, 2021
Top Google Engineer Abandons Company, Reveals Big Tech Rewrote Algos To Target Trump   BY TYLER DURDEN WEDNESDAY, AUG 18, 2021 - 06:30 PM Authored by Kipp Jones via The Western Journal  (emphasis ours),   A Big Tech whistleblower said  Google altered its algorithm in order to ensure that negative stories from the establishment media about former Present Donald Trump were what people saw when using the highest-trafficked website on the internet . Zach Vorhies , who previously worked for Google, said in an interview with  The Epoch Times  that the tech titan specifically tailored its news algorithm to harm the former president. Vorhies  has written a book about his experience working at Google.  He said he wanted to “take conspiracy theory and turn it into conspiracy fact” by sharing the practices he saw as a longtime former employee, working on both Google and YouTube projects. “People kind of suspect this is happening. That  certain keywords trigger things within the alg
Post a Comment
Read more

August 17, 2021
Mob Rule? Twitter Rolls Out New Tools For Speedy Reporting Of COVID "Misinformation" BY TYLER DURDEN TUESDAY, AUG 17, 2021 - 09:45 PM   Big Tech and big social media have already tried censorship by committee with Facebook's oversight board and  the decision to permanently bar former President Trump from the platform.  Now, they're circling back to good old fashioned mob rule. Twitter on Tuesday announced that it's preparing to test a new feature that will allow users to report any COVID misinformation they spot on the platform. Users can already flag content they deem inappropriate (including misinformation). This new feature will allow them to specify the type of misinformation (is it political, perhaps COVID related?).  All of this information will help twitter's algorithms justify its removal from the platform more expeditiously, saving more readers from being exposed to harmful information that might lead them to question the official narrative.
Post a Comment
Read more 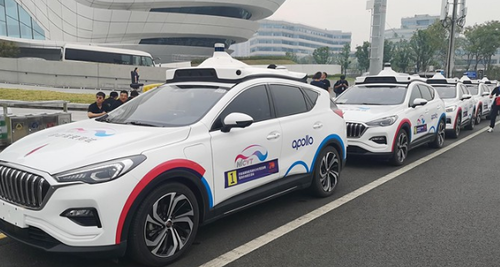 Baidu Says Its Robotaxis Will Be Cheaper Than Human Drivers By 2025 BY TYLER DURDEN FRI DAY, AUG 13, 2021 - 08:50 PM Unlike some  other  companies that have made bold promises about robotaxis <cough>  Elon Musk  <cough>  Tesla  <cough>  one million robotaxis  <cough>, it looks as though the rubber is literally hitting the road for Baidu's autonomous driving segment. Baidu held its Q2 2021 conference call on Thursday morning at 8AM and much of the focus was on autonomous driving and the company's progress and plans for rolling out robotaxis.  "Earlier this year, Baidu's autonomous driving unit Apollo launched paid robotaxi services, that operate without a driver behind the steering wheel, in Beijing and Guangzhou,"  Yahoo noted  about the company's progress thus far. Baidu has said it wants to target robotaxi services to 3 million users by 2023, the report continued.  The biggest headline from the call was that Baidu expected the cost of
Post a Comment
Read more

August 13, 2021
Google’s new ‘time crystals’ could be a breakthrough for long-awaited quantum computers   Dalvin Brown August 12, 2021 Time crystals sound like majestic objects from science fiction movies that unlock passageways to alternative universes. In the Marvel universe, the “time stone” gives wielders control over the past, present and future. While that remains a fantasy, scientists have successfully created micro-scale time crystals for years — not for powering intergalactic spaceships but for energizing ultrapowerful computers.  “Time crystals are like a rest stop on the road to building a quantum computer,” said Norman Yao, a molecular physicist at the University of California at Berkeley. It’s an area of interest  for Google , which, along with physicists at Stanford and Princeton universities, claim to have developed a “scalable approach” to time crystal creation using the company’s Sycamore  quantum computer . In a paper published last month on the research-sharing  platform
Post a Comment
Read more
More posts